One way to think about the state of big data technologies is to draw an analogy with the business adoption of internet technologies. In Web 1.0, businesses busied themselves with getting the basic internet technologies in place so that they could establish a web presence, build electronic commerce capability, and improve operating efficiency. We can think of ourselves as being in the era of Big Data 1.0, with firms engaged in building capabilities to process large data. These primarily support their current operations—for example, to make themselves more efficient.

With Web 1.0, once firms had incorporated basic technologies thoroughly (and in the process had driven down prices) they started to look further. They began to ask what the web could do for them, and how it could improve upon what they'd always done. This ushered in the era of Web 2.0, in which new systems and companies started to exploit the interactive nature of the web. The changes brought on by this shift in thinking are extensive and pervasive; the most obvious are the incorporation of social-networking components and the rise of the “voice” of the individual consumer (and citizen).

Similarly, we should expect a Big Data 2.0 phase to follow Big Data 1.0. Once firms have become capable of processing massive data in a flexible fashion, they should begin asking: What can I now do that I couldn't do before, or do better than I could do before? This is likely to usher in the golden era of data science. The principles and techniques of data science will be applied far more broadly and far more deeply than they are today.

It is important to note that in the Web-1.0 era, some precocious companies began applying Web-2.0 ideas far ahead of the mainstream. Amazon is a prime example, incorporating the consumer's “voice” early on in the rating of products and product reviews (and deeper, in the rating of reviewers). Similarly, we see some companies already applying Big Data 2.0. Amazon again is a company at the forefront, providing data-driven recommendations from massive data. There are other examples as well. Online advertisers must process extremely large volumes of data (billions of ad impressions per day is not unusual) and maintain a very high throughput (real-time bidding systems make decisions in tens of milliseconds). We should look to these and similar industries for signs of advances in big data and data science that subsequently will be adopted by other industries.

Popular posts from this blog

In the just concluded Wimbledon Tennis Tournament IBM showcased some cool technology. IBM SlamTracker™ - a real time statistics and data visualization platform that leverages IBM's predictive analytics technology. It provides an ‘at a glance’ visual representation of a match using scores and statistics and encourages fans to get more involved by interacting with the data to gain deeper insight into the game. IBM SlamTracker™ analyses over eight years of Grand Slam data (over 41 million data points), to identify patterns in players and their styles. Before each match, IBM analyses historical matches between the players (or between players of similar styles if the players in question have not met before). In the last couple of years IBM did trial runs of SecondSight , which for the first time enabled the viewer to track the direction, speed and distance of players as they moved about the court. Data from SecondSight enables displays such as one below. Hopefully
Read more

Following is a great resource for any one considering different choices for their "NoSQL" style frame work. As always, "one-size-fits-all" approach does * not * work for NoSQL frameworks.  Just as a side note that MongoDB, Cassandra and CouchDB are the top three skills sought out on indeed.com (popular aggregator of job boards) of all the databases in the table below. Having a large pool of talent is always a good thing for your technology choice. Source : International Journal of Database Theory and Application, NoSQL Database: New Era of Databases for Big data Analytics Classification, Characteristics and Comparison, A B M Moniruzzaman and Syed Akhter
Read more

March 01, 2013
Look at the two images below and try to guess the search term that was used to generate it...Hint: Term rhymes with "semester". Got it? Answer: Sequester
Read more

Help businesses work with global clients from SMB to Fortune 500 names such as Google, ATT, Salesforce. Coaching on how to use available data to better engage with customer through the entire lifecycle, especially with at-risk customers (to reduce churn).

Following is a great resource for any one considering different choices for their "NoSQL" style frame work. As always, "one-size-fits-all" approach does * not * work for NoSQL frameworks.  Just as a side note that MongoDB, Cassandra and CouchDB are the top three skills sought out on indeed.com (popular aggregator of job boards) of all the databases in the table below. Having a large pool of talent is always a good thing for your technology choice. Source : International Journal of Database Theory and Application, NoSQL Database: New Era of Databases for Big data Analytics Classification, Characteristics and Comparison, A B M Moniruzzaman and Syed Akhter
Read more 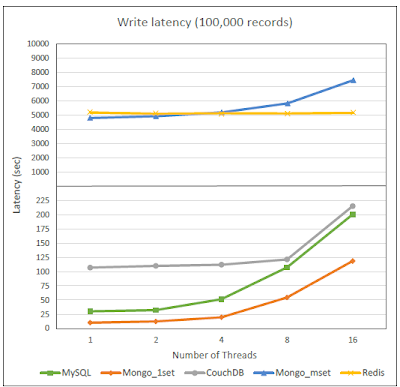 The following 3 charts show how diff erent database systems can effectively handle large amount of  heterogeneous data (such as from internet of things or devices). Two classes of databases were considered in the charts, namely, SQL and NoSQL databases. While SQL databases are relational and focus on data consistency, NoSQL databases are normally schema-less and provide higher scalability and availability. Please note that results may vary based on many factors but the following is a good starting point. Reference Cloud Databases for Internet-of-Things Data, Thi Anh Mai Phan, Kongens Lyngby 2013, Technical University of Denmark Informatics and Mathematical Modelling
Read more

Table below compares multiple big data applications such as Hive, Pig, Impala and others. This is a helpful resource for architects and engineers trying to decide what option to go with for their custom mix of big data needs. Like the previous parts, the 3 big data Vs (Volume, Variety, and Velocity) are used as the dimensions for comparison. This is the last part in a 3 part series that also looked at comparison of other layers of big data ecosystems . Click here to see part 1 and part 2 of the series. Reference On the inequality of the 3V’s of Big Data Architectural Paradigms: A case for heterogeneity by Todor Ivanov, Nikolaos Korfiatis, Roberto V.Zicari, Big Data Laboratory, Chair for Databases and Information Systems, Department of Informatics, Goethe University Frankfurt, Frankfurt, Germany, http://www.bigdata.uni-frankfurt.de
Read more